I’ve been juggling a number of axes this year (should I say swords?), among them is the ongoing pursuit of interesting freelance projects. This latest one is a fusion of my two favorite kinds of gig: Record Album Cover and Comic. As of June 30th the v musician, Ezra Gale of Very Special Recordings launched a Kickstarter Campaign to finance this fusion project. It’s a Double Album + Comic Anthology: each track has a corresponding comic. The only thing more exciting to me than the theme of the art I contributed, is the fact that I am also illustrating this project’s cover. It’s not 100% finish for reasons that are explained within the campaign.

The Campaign has currently reached the 70% mark, and it would be a great help to everyone involved if you simply clicked on over to check out the campaign’s page. Even without pledging to contribute I believe that click well help the algorithms push this project towards success. That’s my logic anyway. Of course sharing it on social media always helps, and if you’re inspired to help out, let me know.

In other good news my injured hand continues to recover. There are still certain things I can’t hold nor can I make a fist. But that’ll change over time. While on the topic of throwing punches I had the good fortune of hearing from a colleague whom I admire greatly: Kung Fu Master Sifu Kisu. We’ve worked together a number of times; on articles, advertisements & photo-shoots. He invited me to an epic kung fu seminar (July 11: Seattle, WA.) which I’ll miss (I also wrote about this in last month’s MUSEletter). Among the handful of Martial Arts connections I’m glad to maintain, Master Kisu is among them. I hope we’ll collaborate again, perhaps share table-space at some Kung Fu in Comics & Pop Culture panel at some convention. Maybe at one of the in-person events rumored to be coming to San Francisco.

Just take a look at this Bio!

Master Kisu has been a dedicated practitioner of Traditional Chinese Kung Fu for over 40 years, primarily focusing on the style of Northern Shaolim Kung Fu from his Sifu, Grandmaster Kenneth Hui (Hui Ho-Kwong), who is the founder of the Northern Shaolim Association of Los Angeles.

His daily practice has led him to understand how to transmit physical/energetic components in such a way that is open and accessible to the Western mind.

Lifelong experience in his craft inspired Sifu Kisu in the creation of elemental “bending” styles seen in the Avatar: The Last Airbender series, which are symbolic expressions of specific styles of traditional Chinese martial arts. 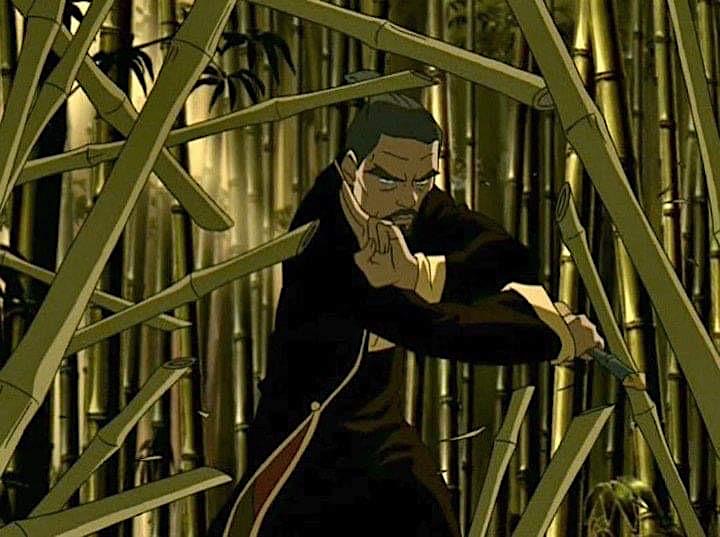 Another character for the #fanart file.

enter your name & email for exclusive access to free comics, and glimpses into my artistic process; plus the occasional doggie pic.

The legendary Shaolin Temple — as depicted in A

Detail of Shaolin Temple as depicted in A TIGER’

Shaolin Temple grounds as depicted in A TIGER’s

Kan prince of tigers : detail from A TIGER’s TAL

Tiger stripes; detail from the forthcoming A TIGER

It’s official! You can read the review of Doctor

The Bayeuxasus - completed. Based on one of a numb

Let me tell you about the Bayeuxasus. Based on one

Ink brush on Bristol board. Not quite a Pegasus n

check out some videos

If you like what I do and want to see more, please consider supporting these efforts on Ko-fi

Your Support Goes a Long Way

If you like what I do and want to see more, please consider supporting these efforts on Ko-fi